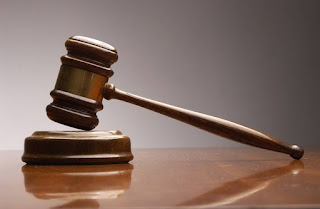 The Supreme Court of the United States passed a ruling yesterday that is very unpopular among Christians because it goes against Scripture and against our beliefs. There has already been much discussion on what our response to this ruling should be. Some Christians actually seem to be surprised by the court’s decision, but I don’t think we should be surprised at all. I am afraid that at times we have become much too comfortable here in America and we forget where our true citizenship lies (Phil 3:18-20).

The apostle Peter wrote that we (the church, followers of Jesus) are “foreigners and exiles” here (1 Pet 2:11). A foreigner (paroikous) is one who “dwells somewhere without national rights” (TDNT). That is diametrically opposed to our views here ---Americans are all about “our rights.” That’s how we got to this court decision in the first place! But according to Peter, Christians do not have national rights in any land on earth.

Think about exiles in a biblical context and when the Jews were hauled off into exile in Babylon (2 Kings 25:11, Esth 2:6, etc). While they were in exile, away from their home country, they did not expect the Babylonians to set up laws in that land that reflected the Israelites' beliefs, nor did they expect the Babylonians to outlaw all pagan gods and rule that all who lived in that land should live according to Yahweh’s commands and moral code. Why do we expect this to happen in America?

God’s instructions to His people while in exile were to “Build houses and settle down; plant gardens and eat what they produce. Marry and have sons and daughters; find wives for your sons and give your daughters in marriage, so that they too may have sons and daughters…Also, seek the peace and prosperity of the city to which I have carried you into exile. Pray to the Lord for it, because if it prospers, you too will prosper” (Jer 29:5-7). Do we pray for the peace and prosperity of this nation or just complain because our rights are being violated?

Peter gave us, as Christians, similar instructions as we live in exile in a land not our own. He does not tell us to try to change the laws of the land or to complain that the government does not reflect the teachings of Scripture. He does say that we are to “abstain from sinful desires, which war against you soul” (1 Pet 2:11). He also tells us to “live such good lives among the pagans that, though they accuse you of doing wrong, they may see your good deeds and glorify God” (1 Pet 2:12).

When those in authority in this country or those within the LGBT community look at us, as followers of Christ, although they accuse us of doing wrong because we believe that marriage is one man and one woman, will they see our good deeds and glorify God? Will they see us living up to our beliefs on marriage? Will they see us praying for the peace and prosperity of this nation?

"Live such good lives among the pagans that, though they accuse you of doing wrong, they may see your good deeds and glorify God."
Posted by Unknown at 9:49 AM No comments:

"Praise and Worship" and Psalm 95 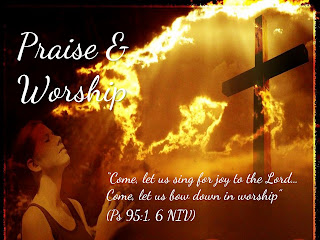 The words "Praise and Worship" are linked together so much that I wonder if many people know there is a difference between the two. In our current church culture, this phrase generally refers to a musical genre or at least the musical portion of the Sunday morning gathering. We have advertisements of when "Show Time" is for a night of worship.

Have you ever thought much about the two distinct words "praise" and "worship"? Why do you think they are usually linked in that order? (I have seen “Worship and Praise” on occasion, but not often.) I think the usual phrase is "Praise and Worship" for a reason, because that is the order in which these two things occur.

Praise precedes worship. Until we praise God -that is, until we see and acknowledge how infinitely great He is, and until we are truly thankful for all He has done for us, we will not worship Him –that is, we will not bow before Him and serve Him.

Let's look at how both of these concepts appear in Psalm 95 (NIV):

Come, let us sing for joy to the Lord,
Let us shout aloud to the rock of our salvation!
Let us come before Him with thanksgiving;
And extol Him with music and song.

For the Lord is the great God, the great King above all gods.
In His hands are the depths of the earth
And the mountain peaks belong to Him
The sea is His, for He made it.
And His hands formed the dry land.

Come, let us bow down in worship,
Let us kneel before the Lord our Maker;
For He is our God, and we are the people of His pasture,
The flock under His care.

Today, if only you would hear His voice,
“Do not harden your hearts as you did at Meribah,
as you did that day at Massah in the wilderness,
where you ancestors tested Me;
they tried Me, thought they had seen what I did.
For forty years I was angry with that generation;
I said, ‘They are a people whose hearts go astray,
And they have not known my ways.’
So I declared on oath in my anger, ‘They shall never enter My rest.’”

The second section tells us why we are to praise Him. He is greater than anyone or anything else. He is God. He is the King of all and the Creator of everything.

Once we acknowledge this and praise Him for who He is and what He has done for us, the third section invites us to worship Him. We are to bow down before Him in worship and to kneel in reverence and obedience before the God who cares for us and leads us.

I have often struggled with how the fourth section fit in. I always found it to be a rather abrupt change, but in looking at it again today, I see how it fits very well.

The first three sections are messages from the psalmist: 1) an invitation to praise God, 2) reasons we why should praise Him, and 3) an invitation to worship (bow before) Him. The fourth section is a message straight from God. It is a warning to us about what happens if we refuse to worship Him, when we don’t bow before Him, and when we do not obey Him and follow Him. It is a plea to remain in His care and not to be prideful, stubborn, and insistent on doing things our own way.

“Praise and Worship” is not a musical genre. "Worship" is not a concert; it is an attitude of humility, of obedience, of willingness to honor and submit to a being much greater than we are –to the King and Creator of the world. I do not want God to say that He is angry with this generation or to describe us as “a people whose hearts go astray…[and who] have not known [His] ways” (Ps 95:10) because we are confused on what worship really is.

Engage in praising our God. Recognize and acknowledge the greatness of our God. Sing, shout, and praise His holy name. Then make the conscience decision to worship Him -- to bow before Him and submit to Him in reverence, humility, and obedience.
Posted by Unknown at 11:17 AM No comments: