How Does the Lord Direct our Steps?

Imagine that you have set out on a journey. You checked the map, consulted Google, and marked out what seems to be the best path to your destination. However, to your surprise, not very far into the journey, you hit a dead-end and all forward motion was blocked with a sign like this... 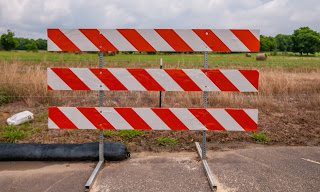 You decide that you obviously made a wrong turn somewhere, so you turn around, start down a slightly different path, but soon you are met with a sign like this one... 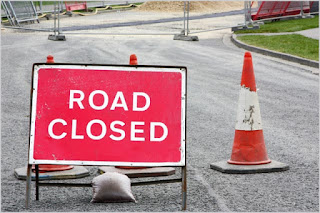 Obviously this is not the right way either, so you turn around once again, study the map, examine the detour signs, and begin again, only to be met with a sign like this one... 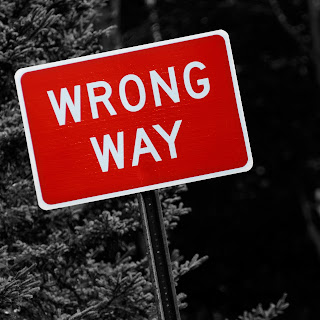 I'm sure you would agree that this would be an extremely frustrating road trip. You'd probably want to give up, turn around, and just go home. I know I would.

When we moved to the Denver, Colorado area two-and-a-half years ago for my husband to manage the LifeWay Store in Centennial, Colorado, I immediately started applying to Worship Ministry positions at churches in Denver and the surrounding area. It had only been about three months since earning my M.A. in Worship Studies and being ordained into Christian Ministry, so this process shouldn't take too long, right? After all, this was the path I believed God had me on, and it was the direction the map seemed to be pointing.

However, this turned out not to be a quick and easy journey, but one as frustrating as the journey described above. We were constantly met with roadblocks, and with signs that said “Road Closed” and “Do Not Enter” at every turn. Weeks turned into months. Months turned into years. All I heard was “No. No. No. No.” “Not here.” (Or sometimes just crickets in the otherwise deafening silence.) At last count, I think I had applied to over 50 churches ---both in the Denver area and out-of-state. The answer to everything and everywhere was “No. Do not enter. Road closed. Go away."

We began to doubt the map and asked God, “Are we even supposed to be here? Was moving to Colorado a mistake? Why did I ever think that You called me to serve You in ministry? Why was I ordained if it would all be for naught after only three months?”

Last fall, after two years in Littleton, our apartment lease was up and we received a notice that they were going to raise our rent. This was not a small increase. It was a big one. We looked everywhere for something else, but couldn’t find anything in the Denver area that we could afford.

Well this has been a fabulous two years. I have run into nothing but discouragement looking for a ministry position. My purse was stolen in broad daylight. My computer suffered a bizarre crash that even dumbfounded the computer repair guy. Then I broke my foot while still living in a third-floor apartment. Now we can’t find a place to live. Fabulous.

A friend in Colorado Springs suggested that we look there because housing there was more affordable than in Denver. I really resisted this idea at first. I thought it would be much too far for Chris to drive up to Centennial for work, and that’s what brought us to Colorado in the first place. Plus, I didn't want to uproot our kids and move them to a different school system again.

Although it took some convincing, we finally agreed to go look at houses on the north side of Colorado Springs. We not only found a house that was in our price range, but one that we love! It even has a nice view of the mountains from the front porch. Okay, so maybe Colorado Springs is where we need to be. Chris’ commute is about 40 minutes --- pretty much the same as what it was in Texas, but with views of the mountains rather than fields and houses. The kids settled into their new schools very well and have made new friends.

So after more than two years of blocked roads and frustrating signs like this... 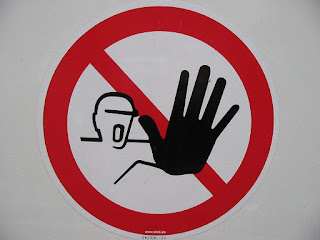 I kid you not --- it was the very next day following this conversation that I received an email from Dallas Christian College, where I earned my undergrad Worship degree, asking if I would be interesting in teaching the traditional format of “Worship Theology and Practice” via distance learning technology. Then----another week or so after that, I found a part-time office job with an organization that works with Christian education. Talk about a green light rather than a "Road Closed" sign! We are in a house, and I now have three jobs that are all related, that are all in my field of experience and passion, and that all work together.

In the past couple of months since these changes have taken place, I have really been contemplating the differences and the similarities between these two situations:

“Paul and his companions traveled throughout the region of Phrygia and Galatia, having been kept by the Holy Spirit from preaching the word in the province of Asia. When they came to the border of Mysia, they tried to enter Bithynia, but the Spirit of Jesus would not allow them to.” [Paul had a vision of a man from Macedonia calling him, so they] got ready at once to leave for Macedonia, concluding that God had called us to preach the gospel to them.” (Acts 16:6-7, 10 NIV).

While we were in Littleton, was Satan the source of our frustrations as Paul wrote about in Thessalonians? Was he blocking my path in order to try to frustrate and discourage me so that I would quit serving in the Kingdom of God? Or was it like the situation that Luke described? Did the Holy Spirit block us at every turn so that we would leave Denver and move down to Colorado Springs to be able to serve where He wanted and where He had planned? I believe He does plan these things --- “For we are God’s handiwork, created in Christ Jesus to good works, which God prepared in advance for us to do” (Eph 2:10 NIV).

Proverbs 20:24 says, “The Lord directs our steps, so why try to understand everything along the way?” (NLT). How does He direct our steps? Could it be through “Road Closed” and “Do Not Enter” signs rather than just by opening doors? Could it be that a small molehill in your way would not make you change paths, but a giant blockade would? Could it be that He sometimes has to take drastic action to move you from your own path to the one He wants you to be on because you have no idea where the road is headed or where He wants to take you on your journey? I know. We just read "why try to understand everything along the way." But it does make me wonder what all God uses to direct our steps. 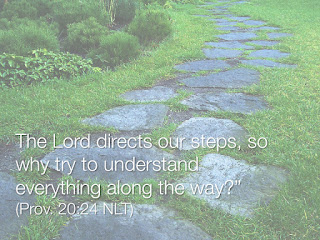 All the "Road Closed" and “Dead End” signs are very frustrating, depressing, and heart-wrenching while you are in the midst of seeking where the Lord is directing you. And we may not ever understand all of the steps and mis-steps along the way. However, it can be a great joy to be able to look back and trace all the ways the Lord directed your steps in order to bring you to where He wants you to be, where you can do the good works He planned long ago for you to do.
Posted by Unknown at 2:18 PM No comments: