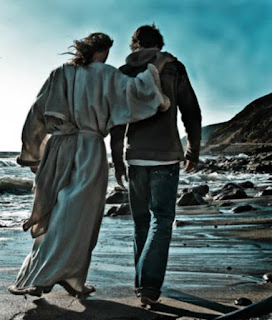 While I was in a store today, a very frightened little girl who couldn't find her grandmother came up to the cashiers for help. The poor little girl was very upset until her grandmother showed up because she thought she was left all alone. When the grandmother arrived, she asked her little granddaughter, “What did I tell you? Didn’t I tell you to stay with me?” This scenario reminded me of a passage I read this week in the gospel of John.

After His Last Supper with His disciples, Jesus spoke words of comfort to them prior to all that was about to transpire. He told them, “Do not let your hearts be troubled and do not be afraid” (John 14:27 NIV). Just a few verses later, He continued, “Remain in me, as I also remain in you…If you remain in me and I in you, you will bear much fruit; apart from me you can do nothing ... If you remain in me and my words remain in you, ask whatever you wish, and it will be done for you” (John 15:4-7 NIV).

I had never seen a connection between the two commands “Do not be afraid” and “Remain in me” before, but remember the little girl? Her grandmother did not want her to be afraid, so she told the girl "stay with me." If the little girl had obeyed her grandmother and had stayed with her, she wouldn’t have been alone, and she wouldn’t have been afraid.

I don’t know about you, but I often struggle with the oft-repeated command not to be afraid. It might be a difficult command to obey, but I think it would be much easier to obey “Do not be afraid” if we did a better job of obeying “Remain with me.”

I saw the little girl a little while later and there was no trace of fear anymore because she was with her grandmother. When we are struggling with fear, maybe we should assess whether or not we are where we are supposed to be. Are we obeying Jesus’ instructions to “Stay with me”?
Posted by Unknown at 10:52 AM No comments:

The Glory of God 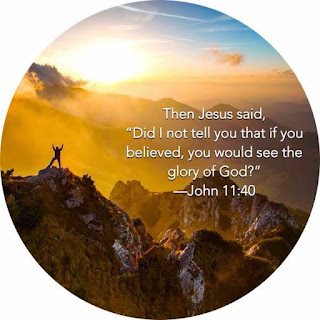 I’ve been slowly making my way through the gospel of John, and this week, I came to chapter 11. John 11 is likely a familiar chapter if you grew up going to Sunday School. You might remember that John 11:35 is the shortest verse in the Bible: “Jesus wept,” so you might also remember that John 11 is about Jesus raising Lazarus from the dead.

Before I read this familiar chapter again, I wondered what practical application could possibly be found in this chapter other than an assurance that Jesus has power over life and death or that we will rise "at the last day" (vs 24). Let's be real -- no one expects to visit a cemetery four days after a loved one was buried and expects to see them walking out of the grave.

As I read through John chapter 11 this time, I was struck by the very similar comments directed at Jesus by Martha, Mary, and the crowd.


Their statements all communicate a belief that:


Martha communicates a tiny spark of hope when she says, “but I know that even now God will give you whatever you ask” (vs 22). I think she wants to believe this, but she is struggling to do so because when Jesus asks them to move the gravestone away, she says, “by this time there is a bad odor, for he has been there four days” (vs 39). In the span of a few verses, it seems that she decided that it was too late --even for Jesus.

One study Bible note says that “In Jewish tradition, the tomb was typically closed permanently on the fourth day –after three days of mourning. According to rabbinic tradition, a three-day period assured the person was actually dead.”[1] Martha’s warning is essentially telling Jesus, ‘This is an impossible situation. I believe that you could have done something earlier, but now it is way too late. Even for you.’

Mary and Martha wanted (and expected) Jesus to heal Lazarus while he was still alive. That would have been a great miracle and a demonstration of Jesus’ love for them as well as His power over sickness and physical health.

But He didn’t do what they expected. He did something even greater. He brought Lazarus back to life after he was dead, the grave had been sealed, and he was beginning to decompose. By delaying action and not meeting their expectations, Jesus performed an even greater miracle than what they expected and they saw the glory of God through their pain.

Do you have anything in your life that is seemingly dead and buried in the tomb that makes you want say, like Mary and Martha, to Jesus: “You weren’t here. You could have prevented this if you wanted to, but now it’s too late. This is all your fault”? I know I do.

But He hasn’t come, and He hasn’t open any doors. After a year, that calling into vocational ministry seems to be buried in the grave and I’m left staring at a sealed gravestone, telling Jesus ‘it’s impossible even for you now –it’s been so much time now that it is beginning to decompose and stink.’

I wish this blog was a story of victory that is on the other side of Jesus' pronouncement of “Lazarus, come out! [And] the dead man came out…” (vs 43-44). I wish I could testify to a story of dreams and callings brought back from the impossible and from the dead. But I’m not there yet. I’m still standing in front of the grave looking at the sealed stone. You may still be there too.

However, those of us who are still standing in front of the grave prior to a miracle can hold on to Jesus' words: “Did I not tell you that if you believe, you will see the glory of God?” (John 11:40). Maybe Jesus is going to do something even greater that will bring God even more glory than what any of us have planned or expected. Let’s hold on to faith in Jesus and to the hope and anticipation of seeing the glory of God in a way we could never imagine (Eph 3:20).