The Hand of God at Work 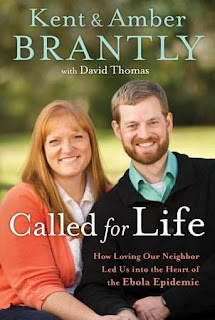 Just over a year ago, a good friend asked us to pray for his former classmate from Abilene Christian University who may have become infected with the Ebola virus while serving as a medical missionary in Africa. This classmate that my friend was so concerned about was Dr. Kent Brantly. In the coming weeks, Kent Brantly became a household name and an international news story, and we joined thousands of other Christians in praying for his recovery. I remember watching the televised news stories for updates on his condition and hearing such fear and concern expressed by the masses. Ultimately, Dr. Brantly was healed by the gracious hand of God, and Called to Life is his story.

Through this book, Dr. Kent Brantly and his wife Amber give readers a window into the personal details of this captivating news story. They discuss their relationship, their faith, and how God called them to serve as medical missionaries in Liberia. They each take turns sharing what they experienced while serving the people of Liberia, caring for victims of the Ebola virus, and the details of Kent’s battle for his life when he fell victim to the deadly disease.

I found their story riveting --very easy to read and difficult to put down. Aside from getting a personal, detailed view into an international news story that I had watched unfold on television, I found two sections of Dr. Brantly’s thoughts of particular worth: the motivation for his role as a medical missionary (pg 76) and the tension that exists between crediting God for healing him or crediting science (pg 206).

Some may wonder why Kent and Amber Brantly would risk their personal health and their family for such a dangerous mission. They felt called by God to serve Him in this capacity and to show the compassion of Jesus to the Liberians. Brantly says, “Jesus healed many people who did not follow him. I believe I am called to do the same. His healing was not predicated on their acceptance of his message. Jesus healed because he had compassion on people. And I seek to have that same kind of compassion on my patients” (pg 77).

This compassion and this calling nearly cost Dr. Brantly his life, but God chose to heal him. Was he miraculously healed by God because thousands of people were praying for him, or was he healed by science, through the experimental treatment he was given? Why did God choose to heal him when so many others died? Dr. Brantly works through all of these questions as he seems to share with the reader a glimpse into his personal prayer journal. He recounts a number of unlikely events and concludes, “Some may call it all a grand coincidence, and I couldn’t argue with them. But when I see the unlikely and highly improbable events that occurred –not only during my illness, but also for decades preceding the Ebola epidemic in West Africa –I see the hand of God at work, and I give him the credit” (207).

Praise God for dedicated, compassionate people like Kent and Amber Brantly who choose to be the hands and feet of Jesus to a dying world.

I received this book from Blogging for Books for this review.
Posted by Unknown at 8:42 PM No comments: 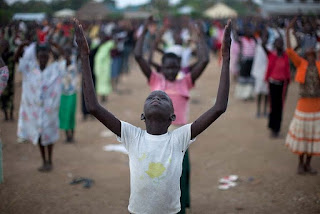 A certain type of post shows up on FaceBook fairly often, and these posts bother me just a little bit. I’m sure you’ve seen them –you may have even written a few of them. I’m talking about posts that say things like:
Don’t get me wrong –we should certainly thank God for the blessings that He pours into our lives. I am not saying that we shouldn't thank Him. However, what does this say to the person who is not able to get a house or land a good job, the person whose health is failing, or those whose children are not perfect? Is God not good to them?

What do we actually mean when we say God is “good”? Are we describing His character or do we mean that He has given us things that we want? If God is truly good, then He is good all the time, not just when He blesses us physically or financially. Why don’t we ever read posts that say:
Psalm 84:11 says “the Lord bestows favor and honor; no good thing does he withhold from those whose walk is blameless.” Does this mean that if He has not blessed me with the material things I want or need that I am not obeying Him?

Paul wrote in 2 Corinthians 9:8, “And God is able to bless you abundantly, so that in all things at all times, having all that you need, you will abound in every good work.” If He promises to give us everything we need, and He always keeps His promises, could it be that we have a different understanding of what we need than God does?
Our American version of Christianity tends to communicate we need a beautiful house in the suburbs, two cars, a college education, a fulfilling career, perfect children, perfect health, and the ability to take the family to Disney World every few years. Are these types of blessings the only ones that show us that God is good?
Hebrews chapter 11 describes the great faith of many heroes of the Old Testament. While we would say some of them are “blessed” because they experienced victory through their faith (verses 33-34), the writer describes others who never experienced victory and yet lived by faith.
“Some faced jeers and flogging, and even chains and imprisonment. They were put to death by stoning; they were sawed in two; they were killed by the sword. They went about in sheepskins and goatskins, destitute, persecuted and mistreated –the world was not worthy of them. They wandered in deserts and mountains, living in caves and in holes in the ground. These were all commended for their faith, yet none of them received what had been promised, since God had planned something better for us so that only together with us would they be made perfect” (Heb 11:35-40).
While we would not describe people in these conditions as blessed, the writer of Hebrews does. I wonder how this passage might read if it were written today?
“Some faced cancer, lawsuits, ridicule, discrimination, and wrongful imprisonment. They faced beheadings, were misunderstood, and were persecuted by world governments. They went about in second-hand clothes and rags, living in old houses, the projects, and cardboard boxes. These were all commended by faith…”
Is our view of God’s goodness dependent upon the state of our finances and our physical blessings? Do we tend to buy into the mindset of Job’s three friends –that if we are not blessed physically and financially that we must be living a sinful life and are being punished by God? What if we posted our joy over blessings like:
Or maybe some of us need to be reminded that:
When in the midst of struggles, we shouldn’t ask, “God is good…isn’t He?” but instead, we should proclaim, “God is good, isn’t He!” It can be very difficult to turn that question into a declaration.

“For the Lord is good and his love endures forever; his faithfulness continues through all generations” (Ps 100:5).

Posted by Unknown at 7:06 PM No comments:

Messy Grace in a Dangerous Minefield 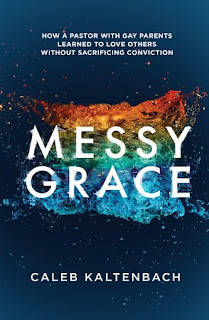 Today’s prolific culture of homosexuality and same-sex marriage can be a very difficult minefield to navigate for those who profess to follow Jesus. People take sides, proclaiming hate for each other and there are numerous misunderstandings and misinformation. We need a compassionate, experienced guide to help us walk through this minefield without any further losses. This guide is Caleb Kaltenbach.
In his new book, Messy Grace, Kaltenbach invites followers of Jesus to “live in the tension of grace and truth” (14), a tension he models for us very well in this book. As a pastor and a Bible scholar, Kaltenbach has studied and wrestled with the Scripture and what it teaches regarding homosexuality. However, he does not use the Bible “as a weapon to bludgeon those who disagree” (8) as some Christians are apt to do. As someone who grew up in an LGBT home, Kaltenbach tempers his adherence to the truth of Scripture with a deep sense of empathy and a heartfelt need to extend grace to all.
He reminds us not to have an “us vs. them” mentality. We are ALL sinners and we are ALL in need of grace –something that many of us tend to forget. As recipients of grace, we are called to extend this same grace to others. This can be messy, hence the title of the book. Kaltenbach reminds us that “if Jesus calls us to be fishers of people and to get involved in the lives of others, we’re going to get messy. Why? Because the grace of God is bigger than any of us is willing to admit. People are messy. Sacrifice is messy. Talking about important issues is messy. Helping others is messy. Love is messy. And that’s all right. We can pursue people for Christ anyway” (35).
Messy Grace is not an abstract book of the theology of grace or of homosexuality. It is a very practical book filled with heartbreaking stories of how we have failed to reach those in the LGBT community and advice on how we can best relate to those who identify themselves as LGBT or to those who “come out” to us.
Today’s culture can be a dangerous minefield, but in Messy Grace, Caleb Kaltenbach shines the light of grace on this messy field. I would encourage all who seek to follow Jesus and to reach our culture to read this book when it comes out in October. You can pre-order Messy Grace here.
I received this book from Blogging for Books for this review.