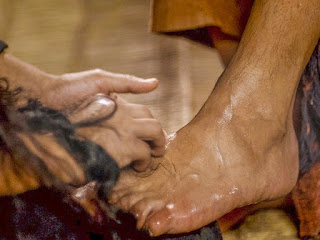 What does extravagant worship look like? What motivates a person to sacrificial, extravagant worship? The apostle John records a beautifully extravagant gift of worship that Mary offered Jesus before He was crucified. The following narrative is recorded immediately following Jesus raising Lazarus from the dead, and just prior to Jesus’ triumphal entry into Jerusalem.


Six days before the Passover, Jesus came to Bethany, where Lazarus lived, whom Jesus had raised from the dead. Here a dinner was given in Jesus’ honor. Martha served, while Lazarus was among those reclining at the table with him. Then Mary took about a pint of pure nard, an expensive perfume; she poured it on Jesus’ feet and wiped his feet with her hair. And the house was filled with the fragrance of the perfume.

But one of his disciples, Judas Iscariot, who was later to betray him objected, “Why wasn’t this perfume sold and the money given to the poor? It was worth a year’s wages.” He did not say this because he cared about the poor but because he was a thief; as keeper of the moneybag, he used to help himself to what was put into it. “Leave her alone,” Jesus replied. “It was intended that she should save this perfume for the day of my burial. You will always have the poor among you, but you will not always have me.” (John 12:1-8)[1]

Imagine that you are hosting a dinner in your home, and your guest of honor is none other than Jesus –the King and Creator of the universe, the Son of God, in the flesh. If that weren’t enough, also present at this dinner party is your dearly loved brother who recently died, but who was subsequently brought back to life by Jesus. This brother of yours was not mostly dead; his brain activity didn’t cease for a few minutes before he was resuscitated. No, he was all dead…really dead…dead for four days and beginning to decompose and stink. Dead. Gone. That is … until Jesus arrived.

If you were Mary, how incredibly grateful would you be to Jesus for raising your brother from the dead? How would you even begin to express your thanks to Him for this extraordinary gift? How amazed are you at the power Jesus has over life and death? How do you even begin to honor Him for how great He is? How do you show Him how important He is to you and how worthy He is of all your thanks, honor, and praise? What an overwhelming evening!

In an effort to show Jesus how much He was worth to her, Mary spent what was quite possibly her entire life’s savings on Jesus. She took a pint of expensive nard, her most valuable possession, a treasure that had likely been in her family for years, and she broke it open. She sacrificed its worth in order to anoint Jesus’ feet. John tells us that Judas Iscariot pointed out that this gift was worth a year’s wages.

I don’t know how much money you make in a year, but this seems like an incredibly large, sacrificial gift. Have you ever considered giving a gift to Jesus that was worth $30,000? $50,000? What about $100,000? Mary poured out her heart and her treasure on Jesus in an act of extravagant, sacrificial worship. One commentator says that “Mary’s lavish gift…expressed her love and thanks to Jesus for Himself and for His restoring Lazarus to life.”[2]

If you want another little glimpse into Mary’s emotional state during this dinner party, look back at John chapter 11. Once Jesus arrived in town, He went to speak with Martha, Mary’s sister. When Mary came out to meet Jesus, she was so distraught that when she saw him, “she fell at his feet and said, ‘Lord, if you had been here, my brother would not have died’” (John 11:32). She blatantly blamed Jesus for the grief in her life, and then a few minutes later, he gave her an unexpected, overwhelming, and rare gift.

I wonder if she experienced shame over blaming Jesus for her loss. I believe she was extremely humbled in His presence. Prior to the dinner party, she probably thought long and hard on how she could best demonstrate her gratitude to Jesus and show Him her estimation of His worth to her.

It may seem to us like Mary didn’t count the cost of her gift. What was she going to live on without that treasure? It was an extremely costly gift, but I believe she did count the cost. I believe she saw so much worth in Jesus, and her heart was so full of gratitude for what He had done for her that the sacrifice she made in anointing Jesus was worth every penny to her. She was so overwhelmed by Jesus that she poured out all that she had on Him in a beautifully extravagant offering of worship.

Have you ever been this overwhelmed by who Jesus is and by all that He has done for you? Is your heart filled with gratitude for how good He is to you, how much He has forgiven you? Are you truly amazed by the fact that He made a way for you to be adopted into God’s family, and that He has called you to follow Him? Can you relate to Mary’s sacrifice or to the words of the following song?

“I am Overwhelmed”
When all around the storms of life are raging
I need to find a place that’s safe and warm
When the wind and waves come crashing down on me
Oh Lord, You’re my refuge from the storm

No, I cannot understand why You chose me
And I cannot comprehend the depth of Your love for me
Oh, I live to give You praise
I’m so humbled and amazed
By just how good You are to me
(Repeat Chorus)

[1] A similar narrative is recorded in each of the gospels, but each of them differs just a bit. It is unclear whether they are similar events or the same event recorded in slightly different manners. In Matthew 26 and Mark 14, an unnamed woman anoints Jesus’ head at the home of Simon the Leper. In Luke 7, a “sinful woman” anoints His feet at the home of one of the Pharisees.

Email ThisBlogThis!Share to TwitterShare to FacebookShare to Pinterest
Labels: I am Overwhelmed, sacrifice, worship