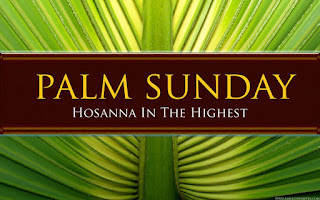 I am fascinated by clear links between the Old and New Testaments. One such link is Jesus' quotation of the opening line of Psalm 22 while He is on the cross. If you read all of Psalm 22, you'll see that the entire psalm relates to his crucifixion experience. It's amazing.

I see such a link between King Jesus (Luke 19) and King Jehu (2 Kings 9). We're going to start with the narrative of Jesus' Triumphal Entry into Jerusalem, a passage that is traditionally read on Palm Sunday, the beginning of Holy Week.

[The disciples] brought [a colt] to Jesus, threw their cloaks on the colt and put Jesus on it. As he went along, people spread their cloaks on the road. When he came near the place where the road goes down the Mount of Olives, the whole crowd of disciples began joyfully to praise God in loud voices for all the miracles they had seen: “Blessed is the king who comes in the name of the Lord!” “Peace in heaven and glory in the highest!” (Luke 19:35-38 NIV)

This familiar scene is remarkably reminiscent of a particular episode in the history of Israel when Ahab was the king. He was not a good king. In fact, Scripture says that Ahab "did more evil in the eyes of the Lord than any of those before him" (1 Kings 16:30 NIV). Ahab was married to Jezebel, a woman whose name is still synonymous with evil. Jezebel was a worshipper of the false god Baal, and she convinced her husband to lead the people of God to worship Baal. Together, they endeavored to kill all of the Lord's prophets. At last, God instructed Elisha to anoint Jehu as the new king of Israel. Through Elisha, the Lord instructed Jehu to “destroy the house of Ahab your master, and I will avenge the blood of my servants the prophets and the blood of all the Lord’s servants shed by Jezebel” (2 Kings 9:7 NIV).

Do you know how the people responded to the anointing of Jehu as their new king? “They quickly took their cloaks and spread them under him on the bare steps. Then they blew the trumpet and shouted, ‘Jehu is king!’” (2 Kings 9:13). Doesn't this response sound extremely familiar? Jehu received nearly the exact same response as Jesus did when He rode into Jerusalem that day.

During the days of King Ahab, God's people were ruled by an evil, murderous leader. God sent them a new king, King Jehu, who was eventually responsible for the deaths of Jezebel and all the prophets of Baal. He even turned their temple into a public toilet area (2 Kings 10:27).

During Jesus’ earthly ministry, God's people were oppressed by evil, murderous leaders. They had been awaiting the promised deliverer who was foretold by the prophets. They firmly believed that God would send a Messiah rise up against the Romans, defeating them and ushering in a time peace, restoring Israel to their former glory days under King David.

The crowds that praised Jesus on the way to Jerusalem had witnessed Jesus healing the sick, freeing the possessed, and raising the dead. These miraculous displays of power must have raised their hopes that perhaps Jesus was the one who would deliver them from the Roman occupation. When they saw Him riding into Jerusalem on the donkey colt, they may have recalled Zechariah’s prophecy, “Rejoice greatly, Daughter Zion! Shout, Daughter Jerusalem! See, your king comes to you, righteous and victorious, lowly and riding on a donkey, on a colt, the foal of a donkey” (Zech. 9:9 NIV).

Everything must have appeared so clear to the people in the crowd that day. Jesus must be the deliverer who would depose Rome, set up an earthly kingdom, and rescue them from their oppressors. They may have even hope that Jesus would turn the Roman temples into toilet areas in the same manner as Jehu. They began to praise Him and hail Him as king that day. Unfortunately, they misunderstood the Scriptures and the prophecies.

They thought they knew God’s plan and how it would unfold, but they were mistaken. They are not the only ones to make this mistake. Over the centuries, many have tried to analyze current events in an effort to predict the end of the world or determine when Jesus will return. All these dates have come and gone without incident. They were all wrong.

On a more personal level, sometimes we are so sure of God’s plan for our lives, but then events don’t unfold how we believed they would or when we thought they would. Sometimes we believe we have the only correct interpretation of Scripture, and no one can tell us any different, but our interpretation is wrong –just like the crowds who believed Jesus was riding into Jerusalem in order to overthrow Rome and set up an earthly kingdom.

The crowds were praising Jesus, and He is most deserving of praise. He is the King of all creation, and He is worthy “to receive power and wealth and wisdom and strength and honor and glory and praise!” (Rev. 5:12). The crowds on the way to Jerusalem were honoring Him as King, and He is the King. Just not the way they had in mind. Did Jesus stop them and correct their theology? Did He stop them and say, “No, no, no. You’ve got it all wrong. It’s not going to happen like this. Let me set you straight”? No. He accepted their words of praise even though their theology was amiss.

Jesus knew the people in the crowd had ill-conceived expectations. He knew their interpretation of Scripture was inaccurate, but He still accepted the praise and honor they bestowed upon Him.

None of us has a perfect understanding of God or of His Word. We cannot put God in a box. Neither can we put ourselves in a box, believing that anyone outside of our little box has it wrong and cannot possibly authentically praise God until they come to believe the same as we do. We all have it wrong to some extent, but we can still praise God for who He is and what He has done for us, even if we may differ on the finer points of some doctrinal positions.

This week, as we prepare for Easter Sunday. let's avoid trivial arguments about our differences and join together to praise Jesus as King and to remember the great sacrifice He made for us.